This weekend was the first in a month that we had to lose Avery.  I really do not like giving him up for visitation, but unfortunately it is the law.  Our “off” weekends for Avery are usually more subdued than the ones that we have him for, and this one was no exception.  I didn’t go to any of Big Daddy’s games on Saturday or Sunday, since I had plans of my own.  Saturday, our friends Samantha and David came over for dinner, swimming, and a bonfire.

I may have had a leeeeetle too much to drink, but a good time was had by all.  I don’t think a night can really get better than a bonfire, s’mores, and classic country playing in the background.  Except if Avery was there, too.  Then it would be 100% perfect.

Saturday dawned with me feeling more than a little under the weather.  Where Waffle House is some people’s hangover food, for some reason hot dogs are mine.  And I atesix of them on Sunday.  Yikes!  Two for breakfast, two for lunch, one for dinner, and one at around midnight when I was hungry again.

The only reason I even made it out of bed on Sunday (you know, besides being a mother to the child that I still had at home) was to get to this cutie patootie’s birthday party:

That’s Kai back in February, when we all ate and played at CiCi’s pizza.

Kai is my friend Daniel’s son (actually, he’s kind of in the same situation as Avery and Big Daddy – Daniel’s not the biological father, but he’s raised him since just after he was born, and Kai calls him Daddy).  He turned four, and like any little boy, loves superheroes.  He had an Avengers-themed party, and for his gift, I brought him an Avengers slip & slide.  Daniel’s kids are total water babies, so hopefully they’ll enjoy it. 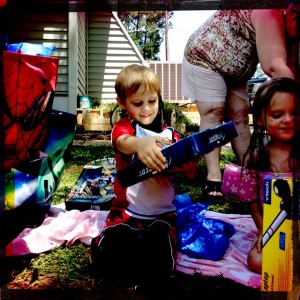 I’m pretty sure that present was a WIN. Look at that face!

They also have a pool at their house, so we hung out for awhile, had some cake and ice cream, and swam a little bit.  Kai was acting afraid of the water at first, and wouldn’t even get in unless his daddy was holding him.  But eventually, once his Daddy got in, he was jumping in over and over, and swimming around in his floaties.

Kai got brave once his daddy got in the pool!

Since it was a holiday weekend, Big Daddy was also off on Monday.  We had plans that didn’t come to fruition, so we really just kind of laid around the house for most of the day.  Did some cleaning (including my van.  yay.  can you sense my excitement?), just regular Monday stuff.  I did see some WWII-related free Kindle books open up yesterday because of the holiday, and I snapped up three or so.  I am Queen of Amazon Free on Kindle, if I do say so myself.  I only buy books if it’s something I totally can’t live without, like the new Sookie Stackhouse that came out May 1 (boring!  where u at, charlaine?).  [I also may break down and buy Fifty Shades of Grey for Kindle sometime soon.  I’ve heard enough about it that my curiosity is breaking me down.  Sigh.] 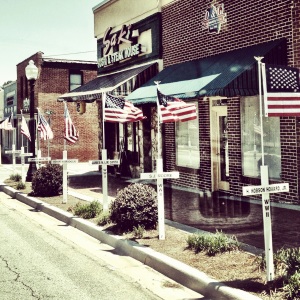 We didn’t really celebrate Memorial Day this year, but I did snap this photo of memorial crosses going down Main Street. There were so many crosses, up and down both sides of the road and filling all the grassy areas. If the person was MIA or KIA, that was posted on the top section of the cross. What a wonderful memorial.

This week should be an eventful one.  I’ve got a list of ideas to blog about at the moment, and hopefully I’ll be able to get through as many as possible: a pressure cooker recipe (and maybe another about cooking without a kitchen, since we don’t have one and it’s a pretty interesting workaround), a couple of Pinterest projects, and how I finally learned to make my laundry smell nice (I never want to get out of bed anymore ’cause it smells SO. DAMN. GOOD.), and some other things, too.  Including the real steam engine that Avery and I are going to ride next Saturday, thanks to a friend of mine from the Mom Squad!  YESSS.

My brother is staying with us this week, though, so depending on how much time he spends playing Call of Duty instead of begging to go swimming (I see you reading this, n00b!), I may or may not get through them all. 🙂  Big Daddy’s schedule is also changing this week, finally, so he’ll get to work normal human hours (7-3, y’all!) instead of the 3:30-11:30pm he was having to work.  Our kids are readjusting to a “normal” sleep schedule, so I’m hoping that someday they can get to sleeping sometime close to 9:00 (that would be a frickin’ miracle) and I will have writing time in the evenings.

Wait, time to myself?  What’s that?  I do not understand that phrase.